So, Phil and I have been working a lot in the yard lately.  Pulling weeds.  Planting flowers.  Cleaning up brush.  We planted a tree today.  Another Dawn Redwood.  It was the craziest thing!  We had gotten a tiny little sapling from a mail order place a year ago.  That tiny little thing snapped off in one of our big spring winds, but had a tiny little twig of green, so we nurtured it and let it grow.  Well, this year, it’s still just this tiny little thing.

So, out of the blue yesterday, Phil called a couple of nurseries to see if they could get us a bigger one.  Surprise!  One nursery had a good size one – 6’!!  Bought it this morning and planted it this afternoon! 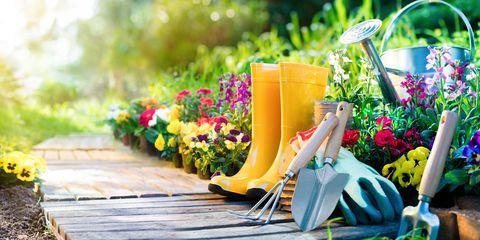 Funny how things just fall into pace when it’s meant to be.  So how does one know when it’s a meant to be thing that just is taking time to manifest or when it’s just not happening?

Sometimes, when things are meant to be, we have changing to do.  We have growing to do.  We are not yet ready for the new thing to arrive.  Sometimes the new thing is not ready – maybe the tree had not yet been delivered from their grower.  Maybe the new career we are looking for hasn’t materialized yet.  Maybe we are in line to get some additional training.

There is no single simple answer to this question.

However, I can suggest this.  If it’s really meant to be, it won’t let you go.  Not like an obsession that we get stuck in a mental loop and cannot break free.  No.  But rather, it will keep coming up even when you let it go.

When Phil was in sales many years ago, he attempted to shift into banking.  Every time he had an interview or put his resume out for that sort of position, he’d go through all the hoops and every time he was let down.  Just wasn’t happening.  He really WANTED that position.  (Why, I’ll never figure that one out – Phil stuck at a desk from 9am – 5 pm?  That would never work!  Lol)  When he finally decided to get back into insurance, he made one phone call and created a partnership that has lasted all these years.

Phil was stuck on banking and wouldn’t let it go and it kept letting him down.  When he remembered that he had been in insurance for a brief time before going into the military and liked it, BOOM!  Landed a partnership that has blessed him (and our family) greatly.

See the slight difference there?  He wanted one thing, but that didn’t happen.  He remembered liking another thing and BOOM it happened.

Because the difference is subtle, it requires being with it for a bit.  It requires noticing on a whole different level.

For me, I had to work at it.  When I decided to step out of the corporate world and into self-employment, I had a desk-top publishing business (this was before anyone could do their own desktop publishing stuff for themselves) and I was starting my Psychic business.

At first, I lost all my previous clients – ones I’d done psychic readings for free.  They didn’t want to pay for something that I had been giving to them.  I didn’t begrudge them this.  I learned a lot through those free readings, so it was on the job training in actuality.  It took me two years to create a new client base - a paying client base that completely covered my expenses (I had a small office and produced a monthly newsletter that had to be printed those days).  At the same time, my desktop publishing business was dwindling.  I was still marketing both, but the reality was, my heart was totally into the psychic readings and not so much into the desktop publishing and the Universe responded to where my heart was fullest and opened those doors more for me.

To be honest, I probably should have given up my psychic business during those two years.  It was really slow-go at first.  I should have been discouraged.  I should have felt defeated.  Any normal person would have quit.  But, I just couldn’t!  My heart was in it.  When a client walked away with insights to move forward, my heart was gladdened and strengthened enough to work harder.  When I made a connection with the Other Side for someone who was grieving deeply and they found peace, my heart sang!  I tightened up on my expenses and did more low-cost group sessions to expand my client base.

Sometimes, we get the BOOM!  Here it is! Response to our goals and dreams.  Sometimes, we work against great odds to get there.

If you are struggling to see a dream manifest, really look into your own heart.  Ask yourself what is the feeling this grants me.  The ego wants recognition and position.  The heart wants fulfillment and to be a blessing.  The Universe/God hears the heart.  What is your heart telling the Universe?  What is your heart’s desire?  Follow that.  It will lead you in your true journey.

May your journey be richly blessed!