Our dear, sweet Tobie Cat said good-bye to the Divine Fellowship building and her caring support staff this last Saturday. 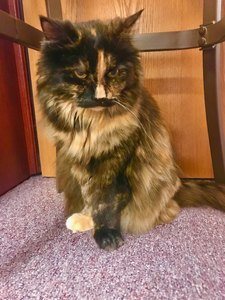 Her tenure as Church Cat began 16 ½ years ago when she wandered onto the property and fell asleep in a basket of clothing in the parking lot garage sale just before we started having services in our current building.  We already had Merlin as a Church Cat, so we gave this little kitty away to neighbors with a supply of food and kitty litter.  She came back the next day.  We gave her away to a different person and another set of supplies and she came back the next day.  We had been chosen.

Right after Tobie arrived, she got a trip to the vet.  We were concerned for her because her toenails were worn completely down.  The vet also discovered 2 BB’s in her hip, a string tied so tightly around her neck we didn’t even know it was there!  And she was pregnant.

Which makes Tobie’s caring personality such a wonder.  Obviously, she had been abused, yet she didn’t let that stop her from loving everyone!  She would sometimes turn and look a person in the eyes when they picked her up - just to make sure she was safe - then settle into being a purr factory bestowing love and gentle caring.  Tobie had her own special Kitty Mission at The Divine Fellowship.  She would wander the sanctuary and find who needed love and then sit on them and let them pet her.  It did not matter if that person liked cats or not.  She had a job to do and she did it.

She stayed at the church until the last part of her pregnancy when Mary Lilga took her home for maternity leave.  Mary and her husband Mike adopted all four of her kittens and returned Tobie to the church when “the tinies” were old enough. 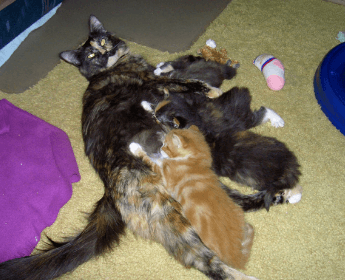 Tobie and Merlin did not get along at first, but I changed the spelling of Tobie’s name from Toby to Tobie and numerologically the two cats were better matched.  After that, they became very good friends.  He protected her from neighbor cats until his health declined and then she protected him.

If there was a healing session at church, Tobie would plant herself right on top of where the healing was happening and then purr – adding her healing energy to the mix.

She enjoyed walking over Tarot cards or laying on them during a Tarot class.  In any class, she made her presence known by going from lap to lap making sure the participants had Tobie energy.

Tobie had such big energy that often when I went to set the church alarm, it would say NOT READY.  I’d look and Tobie would be sitting in the hallway.  I’d stop what I was doing and put treats on her perch in the church office.  I’d go back to the alarm while she had her treats and the alarm would be ready to set – eve though the alarm was programmed to ignore anything under 35 pounds.  Tobie is not close to 35 pounds!

Over the years, many faithful friends tended to Tobie.  Every day someone would show up to clean her box and get her fresh water, pet her, talk with her, and feed her so she wouldn’t be too lonely.  Before the pandemic, there were classes nearly every night, so she had lots of extra love and attention during those events.  Anyone that hosted an event can attest to the fact that Tobie would meet and greet with lots of purrs. 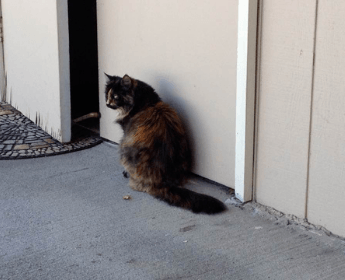 Tobie loved to go out after a class had started and then dash back in when it was time to lock back up.  Sometimes she would venture out looking for grass and usually came when she was called for, but sometimes we just had to wait until she reappeared.  Calling her name and shaking her treat bag often did the trick.  Though sometimes Tobie had hiding places both indoors and outdoors where she would watch the search party.  We would often find her “asleep” under a pew in the sanctuary, or lounging in the teepee in the kids play room.

Special thanks to Team Tobie over these many years:  Misty Kessler, Tonya Segoviano, Terrie McCanse, Terry Ann Christensen, Peggy Huff-Zahn, Sharon Steele, Sharon Denning, Cindy McKay, Laurie Miller, Vanessa Taylor, and Shannon Mobley.  And many others who led classes or visited the church doing other tasks.  It took a village to care for our Tobie!

Her favorite person, Mary Lilga, made sure Tobie’s schedule was attended to and carefully monitored her health and well-being.  She also supplied Tobie with gobs of toys that traveled from one end of the building to the other in Tobie’s boisterous play.

When the pandemic forced services and classes to stop, Tobie’s favorite person took her home to her house for what was supposed to be a few weeks.  It has been six months and Mary faces surgery and lots of changes for recovery.  It was time to consider what was best for Tobie.

Sharon Steele stepped up to give our now elderly kitty a forever home where she can perch on the back of the couch and watch birdies all day and sleep on the bed with Sharon at night.

It has been an honor Miss Tobie!  Enjoy your retirement!  You’ve earned it! 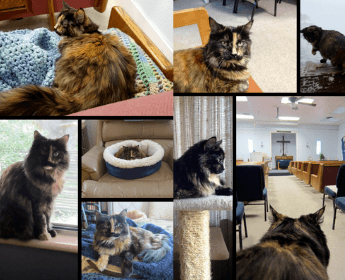 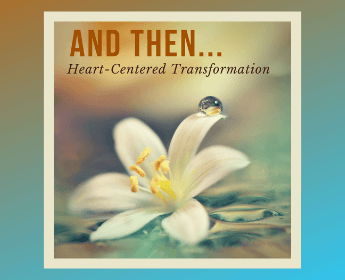